What Causes the Water in a Toilet Tank to Become So Filthy? 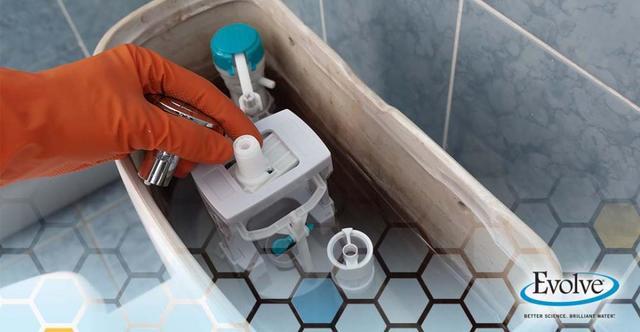 What Causes the Water in a Toilet Tank to Become So Filthy?

The tank behind our toilets is a place many of us rarely look – unless the handle isn’t working properly or the toilet is malfunctioning. That said, a good idea to lift off the tank’s lid every so often and check on the water – and it is not uncommon to find it filled with dirty water and/or with buildup on the sides.

The water tank can get filthy for a variety of reasons, and may get dirty even if the bowl may still look shiny clean. If you find water in the tank that is very dark black color, it’s likely to have elevated levels of manganese in your water supply. If there are brown stains, it is probably from iron in your water. If you discover a thick, slimy mess, it is likely from iron bacteria growing in your toilet tank. Iron bacteria is a bacteria that fixes to iron particles in the water. While not considered dangerous in normal amounts, it is a nuisance people would rather not have to deal with.

Is Iron Bacteria a Health Hazard?

Despite its scary-sounding name, Iron Bacteria has not been shown to cause illness in humans or most animals. The slimy and sometimes oily residue it sometimes makes brings concern to homeowners who see it, fearing their water supply is contaminated. It looks disgusting, often smells foul, and can be a pain to clean. If iron bacteria is found inside your toilet tank, there is a chance you have it growing in other areas of your home as well.

Iron Bacteria thrives in pools of water with iron in it that go undisturbed for periods of time. This could be your water heater. And while it can’t hurt you, iron bacteria often makes people reconsider drinking their tap water, opting for bottled water – unless they get their water system treated.

How You Can Tell if you Have Iron Bacteria

If there is a slimy layer around water inside of your toilet tank it is likely caused by iron bacteria. Additional discoloration of the water isn’t necessarily caused by the bacteria alone, but very likely because of excess Manganese or iron in your water supply. These problems are very common if your home’s water comes from a well. Municipal (city) water supplies typically treat for most metals, so iron bacteria contamination and staining of the tank from iron is less common.

The EV1 Conditioner, EV2 Conditioner, and the EVFE water filtration systems all do an outstanding job at removing iron from a home’s water supply. The professionals at Futuramic’s Clean Water Center are trained to test your water and come up with a customized solution that will provide clean, purified water, right from the tap. Of course, it will resolve any problems with Iron Bacteria, as well.

An in-home water test will teach you some things, but if you’re concerned about water-borne illness from your water, we can take your water sample to our labs to be tested for bacteria and other problematic contaminants. One simple phone call to our office and we’ll be happy to come out and evaluate your particular situation.

What is the Best Way to Get Rid of Iron Bacteria and Iron Stains?

If you do have iron bacteria in your toilet tank, adding chlorine bleach to the back of your toilet and let it soak to remove the existing bacteria may work, but is likely to return in the future. The problem is iron in your water supply, therefore water treatment is the best way to resolve it. A full water filtration system will eliminate your iron and iron bacteria concerns, while providing you tap water that tastes better, has no foul odors, and won’t leave hard water stains or limescale.

While hard water is a very common problem in Nebraska and Iowa water supplies, your toilet tank is being stained is usually not bothered by this. Hard water leaves a white, crusty scale on faucets, in tubs and sinks, on glass shower doors, and around shower heads. Although hard water buildup is a headache for many homeowners in our area, it won’t cause your toilet water tank to turn brown, red, or orange.

However, manganese and iron commonly found in well water sources can bring about these hard water issues. Evolve® brand products like the EV1 and the EV2 water conditioners can both soften water and remove the iron and other metals. By using the popular Crystal-Right media and the technology behind its formation, you can start getting fresher, better tasting water, right from your tap.

Getting Ride of Iron Bacteria in the Toilet Tank

As we noted above, cleaning the tank will only provide a temporary fix to the problem. To permanently resolve Iron problems, give us a call to discuss which Evolve® water treatment system would best fit your home.